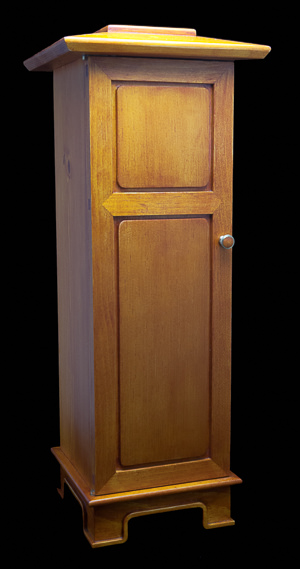 Question #1: Could Buckethead and Banksy be the same person?: I don't like to participate in contests. They just don't appeal to me. So when Marc Gaertner, Vice President of our woodworking club, asked me if I were going to make anything for our contest, I said no. "Why not?" Marc asked. "Don't have time for that," I replied. He persisted. "It doesn't need to be something - you know - special." "Yes, it does." Shrugging my shoulders suggested I had no choice in the matter. Thinking about that on the way home, it seemed kind of a silly attitude. "It ain't my style," said Mighty Casey, before mightily striking out... I had the time so what was the fear? That I wouldn't win the contest? Or that I would? (Question #2: If somebody's not an artist, why would they need an artist's statement?) 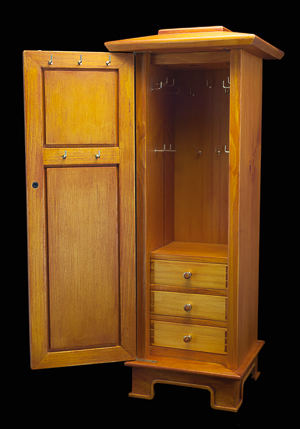 I grew up fiercely competitive, but those fires waned considerably as the years rolled by. I learned the truth: you win some, you lose some; there's absolutely no getting around it. If I entered my club's contest and lost it would be a blow to my ego. If I won, what did it prove? That after 40 years of doing this I can make something judged "better" than someone who might have started woodworking last year. As the infamous Derrick Coleman once said: Whoop-de-damn-doo!! Definitely a lose - lose situation. Furthermore, the rules for the contest - that whatever was built would have to be made out of less than 8 board feet of one species, were not interesting at all. If you look through this site you'll see that all the boxes are made of several different woods. For whatever reason, that's the way I work. And, if I did make it out of one species alone, it would probably have to be stained, and I haven't stained anything in, maybe, 15 years. No reason at all to make something for this contest... So, naturally, I decided to do it. 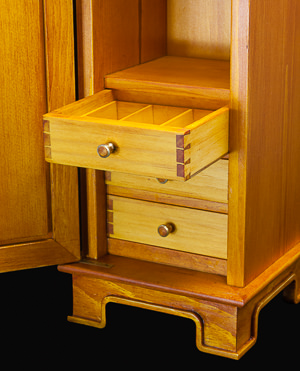 A few years ago, my wife and her best friend, Elaine, were sitting out on our veranda. There's a gravel area there separated from a small garden by a lawn edging I'd devised. This edging is nothing special - a series of 4x4's cut to different heights, arranged to look like a sort of fence. We laughingly called it the Great Wall of China, and, since it had acquired that name, I built, at the end of each run, a small addition, a "guardhouse". There's a photo of one of them above. Elaine is a very accomplished artist (you can see some of her paintings here ). We love her work and value her thoughts about design and colors and lines. And she seems to like some of my boxes. Though, who knows? (Question #3: What's the relationship between art and craft? Decorative art. Fine art. Context? Scope? Purpose? Inquiring minds want to know...) 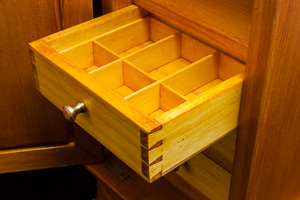 Anyway, while sitting with Karen, Elaine remarked that my little guardhouse would be a good shape for a box. Karen reported Elaine's comment that night. Interesting that what was essentially a joke appealed to her eye. (Question #4: Was there something there I had missed? Extra credit: Why?) But it would be an odd shape for a box, so small, so vertical - what could it hold? - and I had no desire to make something with those proportions. It didn't fit with what I do, so I just let the remark pass. Until last month. Because, I decided, that's what I would make for the contest. A box based on the "guardhouse." It made sense, the kind of thing that should be constructed of one species, would take (much) less than 8 board feet. I could use the cheapest softwood available (loved that part of it), the inauspicious common Eastern white pine - purchased at a nearby Home Depot. And pine could (should) be stained without too much trouble. And we would surprise Elaine with it. She thought of it. She should have it. 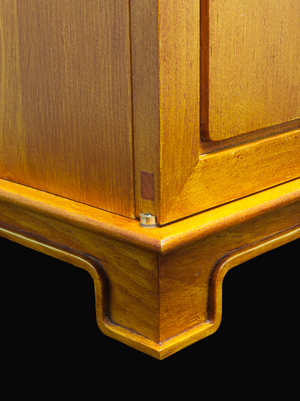 Working the pine was funny. It's so ridiculously soft you can cut a mortise without using a hammer. And the staining made me realize just how much I've forgotten from my days in cabinetmaking. But all in all it was good project, well worth the time spent. Moments, minutes, hours in the shop, absorbed in this old process, building another little box, trying to... Question #5: P.S. Elaine liked the box.