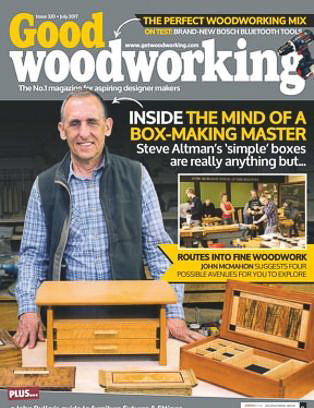 M y father made "paper" boxes. Which is to say that he was the foreman of a small display box company where I grew up, in Jersey City. Display boxes were called paper boxes. They were made from sheets of cardboard (not corrugated, definitely not corrugated) that had been scored on a "Robinson" machine, then folded and wrapped. Jewelry, pens, shoes, shirts - basically all retail products sold in stores at that time were packaged and presented in paper boxes. So when I was a cabinetmaker I would say "My father made boxes out of paper; I make them out of wood. Same thing, really."

He called the factory where he worked the "shop". Sometimes, when I was little, he'd have to "go over to the shop" and we'd walk, hand in hand, the few blocks from our apartment to the factory. While he worked, I'd spend the time playing, hidden in canyons of stacked white boxes. I remember the Robinson clamoring as my father dealt sheet after sheet through the scoring knives...

The boxes I make are decoration - bits of eye candy perched on a dresser, sitting on a desk, or plunked down haphazardly on a table. Hopefully, though, inviting a closer look, they provide a glimpse of wood's infinite possibilities: Sight and touch, color and shape, figure and texture, revealed aspects of natural wonder, arrangements bound by simple human effort...

Plus, they hold things.

I think he would've liked them.