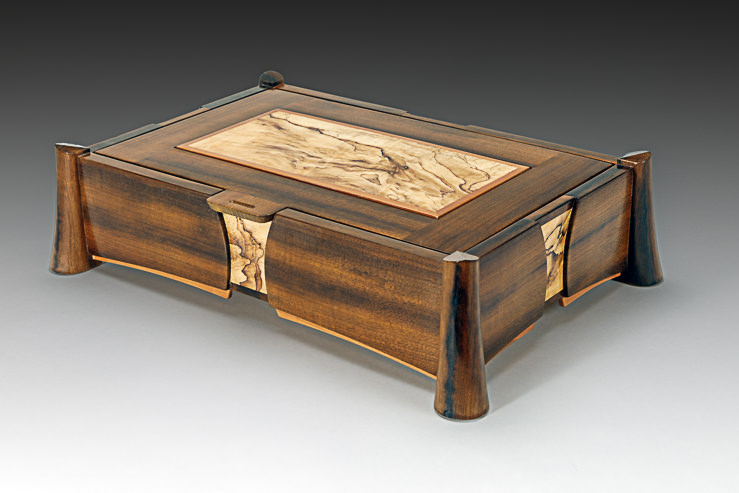 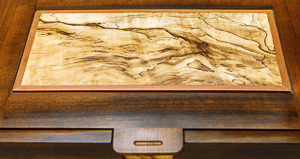 I've been collecting little pieces of wood for the last 30 or 40 years. It's a pretty innocuous passtime. Doesn't cost all that much. But you do have to store the pieces you've purchased. And sometimes you store it for years.

The spalted maple panels here come from a small block (cut into veneer) that I've had for 15 years. Used some of it about 10 years ago, but not since. So it's been just sitting on a shelf, patiently waiting to be chosen for its turn at the bench. 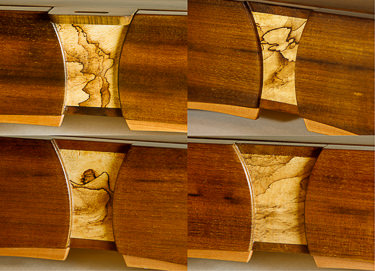 Its figure is so appealing - waves crashing ashore, or maybe, gullies racing across a hillside, little pieces of it conjuring a crowd of profiles, a hillock, a cloud.

It's called a "black line" spalt. Sometimes, people think I drew it in with a pen.

The main wood of the box is imbuya, selected because it "goes" with the spalted maple, and not just in color. Visaully, it's as unpredictable as the spalt, maybe even more so. Imbuya is a variegated wood. One piece never looks like another, even if they come from the same tree, the same branch. One surface doesn't even look like the surface on the other side. The black stripes are there...and then they disappear a few inches away. Sometimes, they widen and shorten across the rest of the grain.


But imbuya is great to work, very agreeable, tolerant, forgiving, and has wonderful spicy smell to boot. I use it a lot. 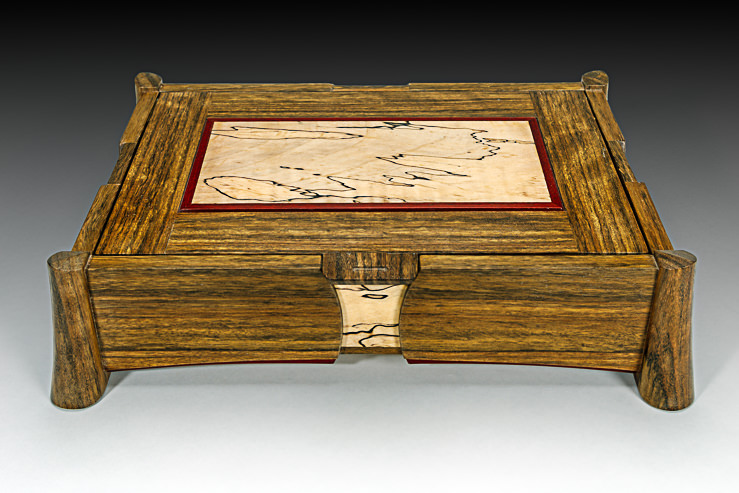 On the other hand, shedua is a wood I've never used before. Don't know why, its a lovely wood, just never bought any until recently when there was a reference to it in the inventory of one of the lumber merchants I use reminding me of an odd experience a very long time ago:

In another page of this site I've written about my first time encountering English brown oak and described an old guy sitting on a dock in Red Hook, Bklyn, in blazing hot sun, with a group of other men (his employees?), playing poker. All of them, I guess, were supposed to be working for Marshall Veneers, which, at that time, was one of the largest veneer merchants in New York.

When we inquired about the ebony we were seeking he asked if we knew who he was. We didn't. "I'm Henry Marshall." He was probably joking, just fooling with the youngsters looking for some free wood. But I've always had this fantasy that maybe he really was Henry Marshall, owner of Marshall Veneers, working on the dock because he had no use for the "corporate" life and rather liked the life of what was essentially a longshoreman, a kind of Eric Hoffer.

Besides pointing where the ebony chunks were, and inviting Bo and me into that quonset hut for a tour of the facilities, he made an interesting passing remark. We were looking at a flitch of beautiful timber and he asked me if I knew what kind of wood it was and I admitted I didn't.

"It's shedua." He stared intently at it for a moment. "I named it."

Was that true? Another joke? As it turns out shedua is one of the woods that has many names: ovengkol, amazakoue, amazique, hyedua, black hyedua, mozambique. Maybe he did give it one of its names... 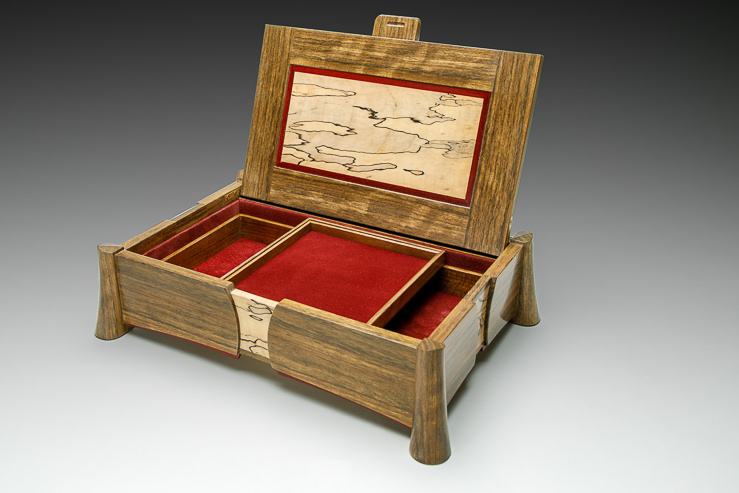 In any case, I thought this piece of spalted maple, very different from the one above (and just purchased), looked great with shedua. Throw in some blood...wood and you have a pretty nice combination.