It was a two man shop, not more than 1200 square feet in a building at 131st Street and 2nd avenue, Harlem. Bud was sitting outside his "office", the smallest room I had ever seen, a few pieces of plywood partitioning off one tiny corner of the shop, just enough for a desk and chair. Like being in a walk-in closet. A child’s fort. He was on the phone, head bent down, long gray hair (very James Dean) drooping, obscuring his face. Intent on some conversation. I was across the shop, at my bench. Suddenly, he looked up. "Who scored the most touchdowns in an NFL game?" He was actually asking me something… We had met 5 or 6 weeks before. He had advertised in the Times for a cabinetmaker. I answered and met him at his shop. He told me that his partner, Len, had just retired - age 72. We talked a bit about our cabinetmaking experience, the extent of his, the lack of mine. I knew I'd be lucky to work for him. He was probably 30 years older than me and I could plainly see that he knew what I wanted to know. So when he asked if I were interested I said I was. "I think it would be great to work for you" 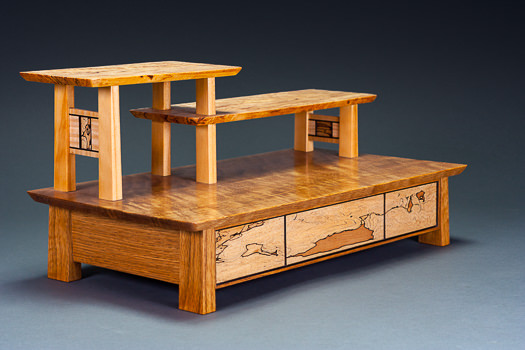 "No", shaking his head, adamantly. "I don't want an employee. I don’t like employees. I want a partner. We go 50-50 on any job we do." "Partner?", I thought, "wants me as his partner? Must have really impressed him." I quickly agreed and within the next few days moved my stuff into the shop. If I had impressed him he sure didn't show it. Puzzled way he looked at my tools. Worried glances as he watched me work. I had too many planes - "What in the world do you need all those planes for?" - and not enough sense. He particularly didn't like the way I screwed things together - "You really have no idea what you're doing, do you?" he'd joke. It was just a needle, his way of being friendly – and I could needle him back, about his age, he was sensitive about that - "My God, you are really out of touch, aren't you". Struggling mightily to keep up my end of this partnership.

I met some other guys in the building, tradesman with their own shops. All of them much older than me - I was the "kid." There was Pete, who had a very large cabinet shop next door to Bud's. He had no one to help him except a few faceless benchmen whom he would excoriate with incredibly foul language several times a day, screaming at the top of his lungs. We could hear him clearly through the walls, imagining him foaming at the mouth. Then, seconds later, he'd visit our shop, quiet, friendly, smiling.

Pete was Sicilian. Supposedly, that explained everything. Then there was Al, down the hall, an old black fellow who worked metal alone, surrounded by his milling and drilling machines, tall, gaunt shadows in the darkness. It was always night in his place (were there no windows?). Al didn’t like to waste electricity. The only light in the whole shop that was continually on was over his desk, a single fluorescent fixture. When he worked he would turn on the light hanging over that machine only. When he’d finish, he’d turn it off. I had a few things in common with these men. I had played in a paper box factory as a child, worked in one as a teenager, so the environment was not entirely foreign to me. I like to make things. So did they. But we came from different generations. Me, with my college degree, hippie/yippie connections. Bud, married 3 times, having lived his entire life in Greenwich Village, not much education. “Cabinetmaker to the kings” he'd proclaim, smiling softly, ironically. When I, as a high school freshman, had been listening to Art Blakey records, Bud had been out with Blakey himself, drinking in the Manhattan nights. Him and his buddy, Romare Bearden. As time went on I learned an awful lot. He showed me what it was like to be an artisan, a tradesman, maybe a craftsman. He knew the work and how to do it. He could produce quality stuff, run a real professional job. He knew way more than the GC’s about high end renovations. He showed me the way it should be done. Techniques: How to "stack" shelves when they're wet from oil finish. The physics of contact cement and laminate. And, of course, the right way to screw things together. 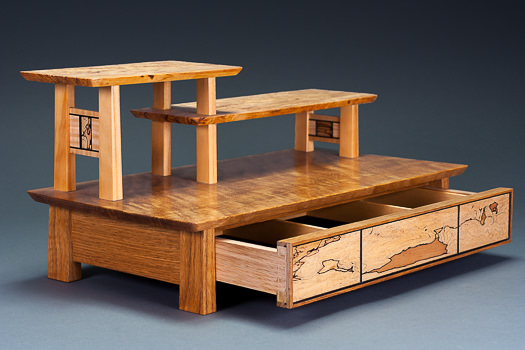 Tricks: How to create an opening in the lid of a coffee cup so that you could sip it when riding in a car and it wouldn't spill. (Yes, there was a time when you had to do that yourself.) He had learned that from his friend, Sullivan, a "professor of truckology." Important things: How to do it right, every single time, no matter what. How to impress clients - not always the same thing. How you could spend your days, free. Doing work of your own choosing. He even showed me how to fool people but only when it was required. And I suppose I brought a certain kind of youthful energy and dedicated exuberance to the partnership. Bud could get depressed, sometimes. His wife was suffering from lupus. Maybe I was a diversion, who knows. We split the money. We were partners. I was with him for maybe two years, a little less. I did learn a lot but the money wasn't much, and I needed more, had to make more. So the time came when I told him I was leaving to become the foreman of a shop downtown. A conventional job. He just nodded. I don't think he was happy about it but he never said. To this day I'm not sure where I stood with him, he didn't talk about things like that and I guess I didn't either. But we did spend that time together, just the two of us in that tiny shop, him showing me the ropes, me trying to hang on… ..."Gale Sayers", I said. "Gale Sayers scored 6 times in a game." He stared at me and I could see he was carefully weighing my words. It seemed to matter. Maybe there was money on it. I hoped he'd trust me. Bud liked sports. So do I. We had that in common. The Kansas Comet.

He put the phone back to his ear; looking down again. Spoke a few words into the receiver. I saw him nod, and then he looked back up at me. "Hey, Steve," he smiled, broadly. "You're right." Touchdown! The box is made of a lot of different woods: english brown and white oak, spalted maple, sycamore, ebony and masur (Karelian) birch. The cock bead on the drawer is sort of mitered/rabbeted around, at least the first 3/16” is mitered. I guess the theory is that if the drawer moves in its height (which really shouldn't happen here since the poplar core is cross-veneered under the spalted maple) – and the miter opens – that doing it this way ensures that it won’t be noticeable? What is definitely noticeable is that I cut the ebony a little too wide, and that I’m not particularly good at dovetails. Oh, well. In case it concerns you, the little panels - 3/32” thick bandsawn spalted maple grooved (floating) into the ebony/sycamore frame - between the columns are loose in their mortises, so if the oak below and the birch above move the columns will be free to move with them – the english brown oak is attached to the box with screws through slots for the same reason. Screwed right. I don’t know if Bud would like this box. He might think it’s much ado about nothing, too much time spent on not enough result. Probably right. Maybe I’ll look him up. Maybe he’s still alive. George "Bud" Poppe. Ought to find out…