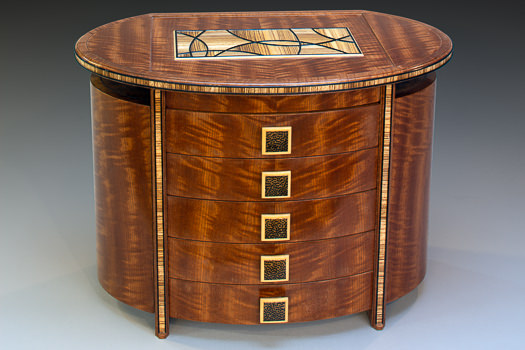 (11/8/18: This cabinet has just won Best in Show for Craftsmanship at the Waterfire Fine Furnishings Show in Providence, RI)

A nyone who builds anything gets compliments. It's inevitable. People want to be nice, or they actually like what you've done, or they feel they're supposed to say something when they see what you've built, so they murmur "Good work" or "That's really nice" or more effusive things - "you seem to have confused the word 'box' with the phrase 'work of art.'"

Compliments are great and I thank anyone who's ever given me one.

But the truth is, after a while, compliments don't mean much. You kind of expect them, there's no surprise when they happen and that surge of pride in accomplishment that one initially feels diminishes over time. For me, now, compliments move me - require me - to consider my own work, objectively: Was it a success? Well, it's finished. Did it come out the way you've envisioned it would? Maybe. Don't know. Not sure...

Honestly, I can barely see it at all.

It's just a bunch of dissenting opinions.

About 10 years ago I received an email from someone attending the University of Singapore. I don't know if they were a man or woman but I suspect they were young. 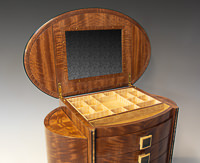 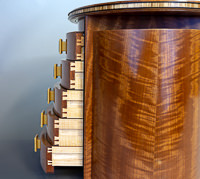 The email continued: "I live in a city where there's lots of trees but very little wood." Well, that was an interesting thing to write. I had a vision of a city filled with concrete, steel, and glass architecture. Maybe there were trees lining the streets, but was there no wood used inside those buildings? I guess not. "I'm learning the violin, so I'm becoming familiar with wood, especially the way it sounds.", the email went on. (A nice way to learn about wood.) "But the reason I'm writing is simply this: I want to let you know that the way you work with wood reminds me of my father, who, when I was growing up, raised orchids."

For some reason, I thought that was the nicest thing anyone ever said about my work. Not even sure why. Not even sure if it was meant as a compliment. But I was elated. I returned an email thanking the sender. I should have sent them a box. 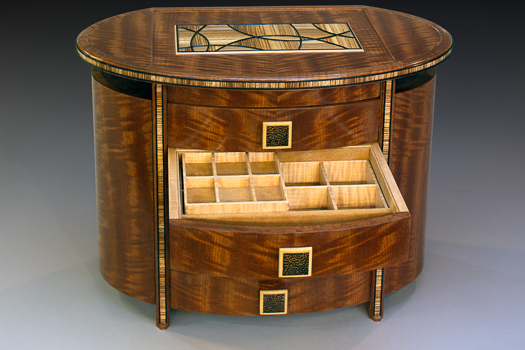 A few months later I suffered one of those "emails have vanished" situations that were so common on computers then, and the email was lost. Which is why I haven't been able to get back in touch with the sender. Which is something I'd really like to do.

Because the comment, itself, has stayed with me, in an unexpected way. Sometimes, when I'm working on a project and things aren't going well, I get extremely discouraged. What's the point of all this? Why spend so much time worrying about details, the thickness of a handle, the width of a molding, the arrangement of space in a drawer? Is the partition too tall? The space too small? That choice of wood is wrong; what can I do about it? Is there anything that can done about it?

Who the hell cares about such things?

If it gets really bad, I continually obsess about it, grow dejected and distant. And for what? A pile of wood?

But then, if I'm lucky, those words come back to me, a respite.

Was it a pleasant memory for the violin student? I think so. It seemed so. I sure hope so.

Maybe there is a point...