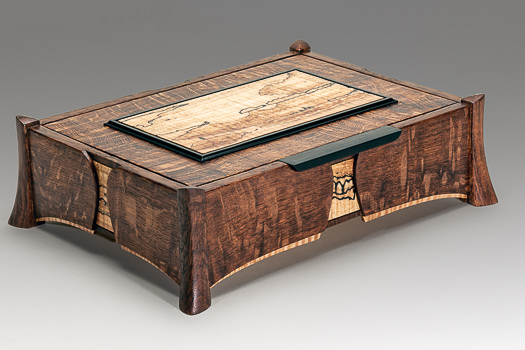 Isuppose there's other people my age who do the same thing. But it's not about Facebook. There's no desire to connect with people from my past. Just a curiousity to find out what happened to them, to fill out the story, maybe try to understand that portion of our finale. So I do google searches on names from my past, people I haven't seen or spoken to for many, many years. And most of the time the search comes up empty.

The problem, it seems, is that the large majority of my life was "pre world wide web" so as likely as not there's no record, no mention of them. As if everything started with advent of the internet.


It's like that with Bud, for instance. I don't know what happened to him and can't find any reference on the web. There's many more I can't find; very few I can. So there I was, a few nights ago, thinking about the anecdote about to be told here and doing a search for Bo Walker as I had done many times before, with no luck. I knew he had died, way too young. But I wondered what had happened to his art, whether there was any recognition as to how seriously talented he was. And then...there the reference was, written just two weeks earlier. If you read it, I can add some info. The "spacious studio" space in Brooklyn that's mentioned was actually in an industrial building on Manhattan Avenue. The space was split in half by a wall with a large arched opening. My shop was one side, Bo's was the other. He was renting that space from me - I had a lease with the owner of the building, actually lived there for a few years, in what was known as a "raw loft" on another floor.

I saw Bo every day, working on his art, his sculptures. His daughter, Panya, sometimes played with mine, Jessie. Sometimes we talked about things, art, memories, experiences - Bo's fondest memory of Stanford was blasting over the Golden Gate in the middle of the night riding his motorcycle. I envied that. Sounded like great fun. 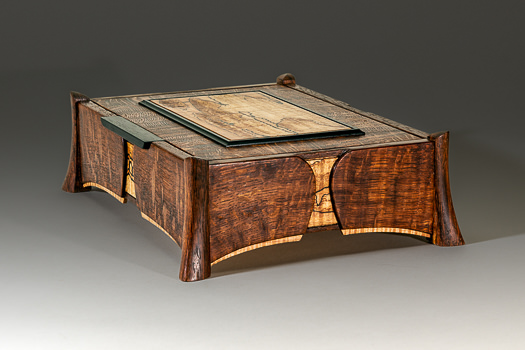 One day he mentioned that he'd heard about a place in Red Hook, right on the Gowanus canal, where someone was giving chunks of ebony away. He wanted to use these pieces as bases for his sculptures.


So we drove to the other side of Brooklyn in Bo's AMC Pacer(?), one very hot summer day, hunting free wood. We came to the address, a long quonset hut of a building, right on the fetid waters of the Gowanus canal. Outside the front door of the building were 6 men, sweating in the sun, playing poker. We approached them and asked about the wood.

"We heard you have some ebony you're giving away..."

The oldest of these men, rotund, unshaven, smiled and nodded toward the door of the building.

"Over there, in the barrel. Take what you want." 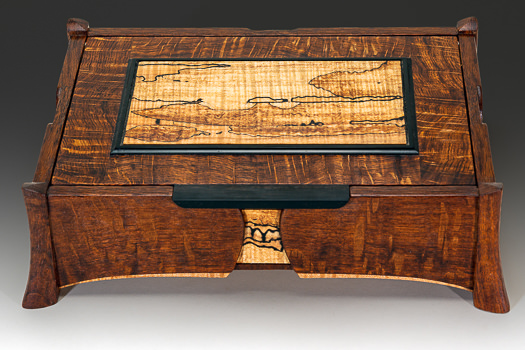 Our eyes followed his nod.

In the barrel were thick chunks of ebony, dozens of them. We were delighted to grab a few.

The old man sauntered over to us. "You like wood, I guess."

"Yeah", we answered in unison.

"Then come inside, I'll show you something"

We followed him into the building. And I saw things I had never seen before:

Exotic wood, stacked to the ceilings. Zebrawood, Padauk, Satinwood, Bubinga, Makore. Timbers I had only seen in photographs. Huge, wide boards, bark to bark (called flitches), boules (all the flitches stacked). An incredible collection of the world's finest timber. And, in one corner, flitches of English brown oak, 30" wide.

I was flabbergasted, amazed. A new world had opened up.

Turns out we were in a warehouse of a major veneer supplier that had, at that time, a street level store on 5th Avenue, near 26th street. Just can't remember the name, now. And Google doesn't remember, either. Pre world wide web... 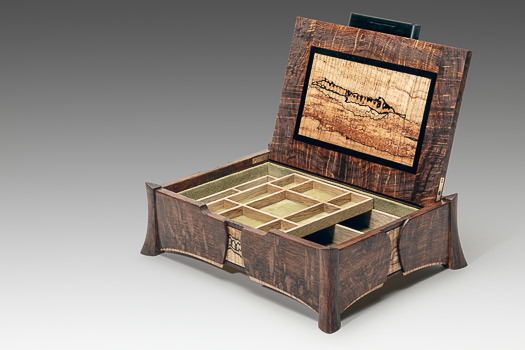 That day was the start of my predilection for exotic lumber, particularly English brown oak. Over the years, I've collected pieces of it whenever I could. This box is made of some of those pieces. And making it reminded me of that space in Greenpoint. Two young men pursuing their passions...trying to build careers.

As it turned out, Bo never had a chance to continue his art, and the world never got the chance to experience what he would have created.

But it is nice to see he has been "remembered."

He was a good guy.